Know the feeling? … When incoming emails, telephone calls and unexpected events scupper your own work plans.

Not only at work, either; we all know of situations in our personal lives where tasks suddenly become a lot more complicated than expected. One inspiring method to tackle these challenges is Kanban. The basic principle involves getting tasks moving and thus creating a “flow” experience in the truest sense of the word.

Kanban comes from Japanese and translates as map or signal, which already points to a key aspect of the method: it works with maps or Post-It notes and visualises tasks on a so-called Kanban board. Today, Kanban is widely used in industry in production process control and at IT companies.

Companies turn to Kanban in order to curb production and development bottlenecks and the associated costs. The problem with long production chains is that the entire process grinds to a halt as soon as a link is unable to deliver. By discussing the current status regularly with all those involved, potential bottlenecks can be spotted at an early stage and production breakdowns or even overproduction avoided. It was out of the need to visualise the state of affairs and have an overview of entire production chain that the Kanban board was Born.

What contributed to the success of Japanese industry is now being adapted for other sectors. For instance, Kanban has now caught on in software development, where it is used to visualise cross-team and common project statuses.

However, the Kanban board is also useful to keep an eye on your own complex tasks and make sure they flow.

A simple Kanban board consists of four columns:

The tasks written on Post-It notes, which ought to be worded as precisely as possible and not too generally, eventually move from the “To Do” column to “Next”, then “Doing” and finally “Done”.[1] 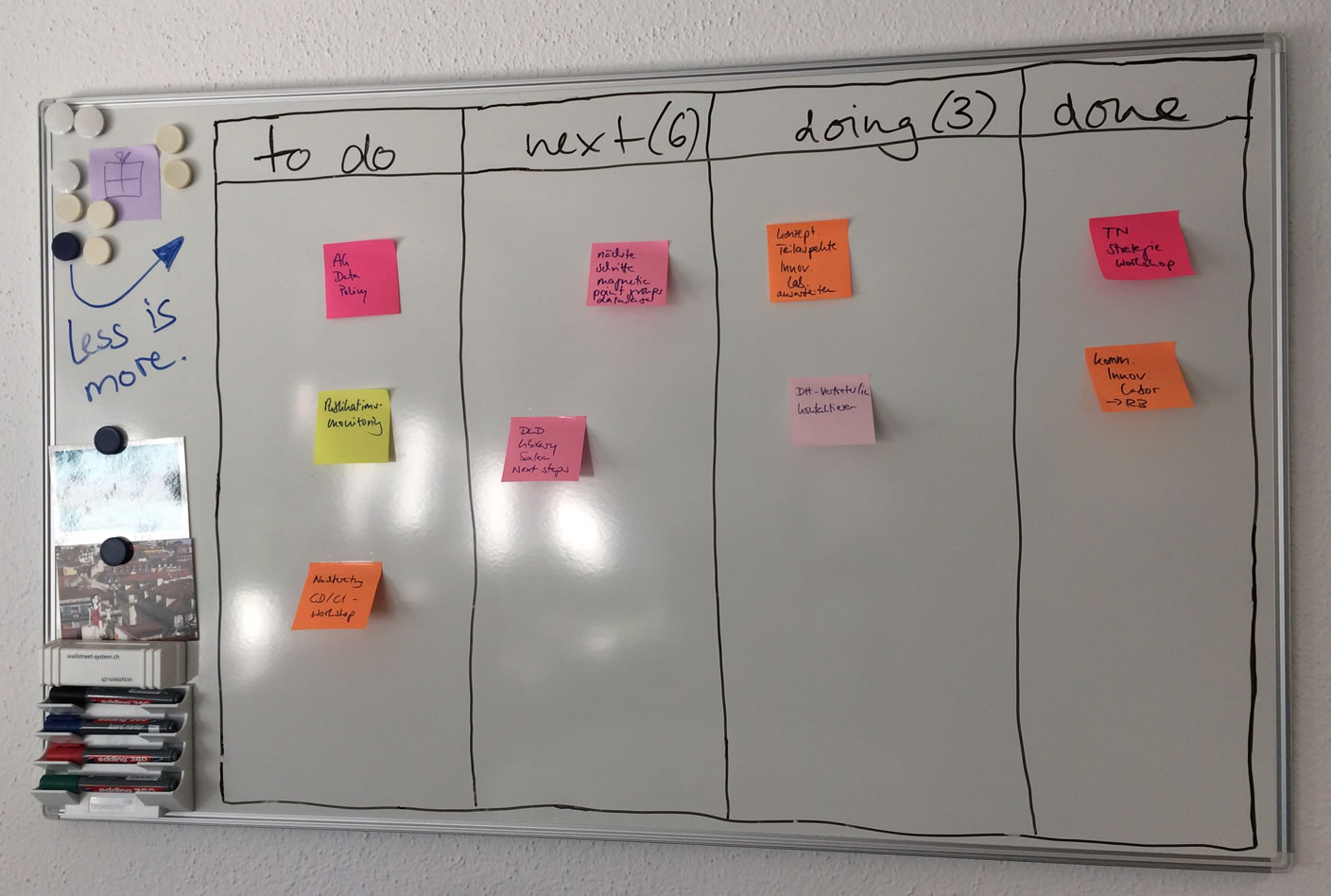 The Library and IT Services (BIT) team at ETH-Bibliothek uses a Kanban board to discuss the team’s tasks. This gives all the team members an idea of what their colleagues are up to and enables them to see who is very busy or even overstretched.

The BIT team’s digital Kanban board at ETH-Bibliothek

The board is administered digitally via Jira. The BIT team has adapted it to their needs by adding a “Wait” column, which contains tasks awaiting input from others – such as external providers.

The authors of this article use Kanban in different contexts, not exclusively as a work tool.

By visualising and moving the tasks, Kanban makes it easier to talk to others about your own work. And that’s not all: Kanban is fun and an eyecatcher in the office or on the screen.

For more information on Kanban, we recommend the following sources/websites:

[1] The author received the suggestion for this simple form of Kanban board from Nadja Schnetzler during an evening course.