The spacious foyer of the Melbourne Convention and Exhibition Centre (MCEC) welcomed librarians from all over Australia and New Zealand to the biennial VALA Conference. VALA serves as a platform for an exchange of ideas on insights gained and new developments in the library sector, and features exciting talks by keynote speakers. As Lee Rainee mentioned in his presentation, this exchange is important: “In order to thrive in the future, librarians will need to be great forecasters and innovators. There are key puzzles they need to figure out.” 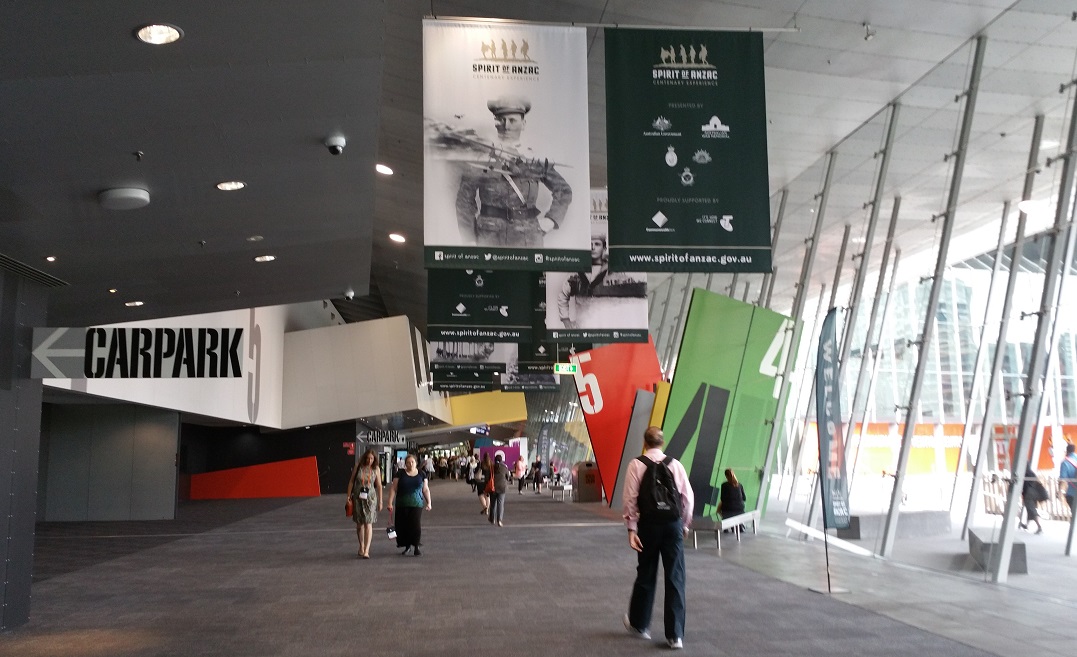 Two American keynote speakers gave the opening and closing talks on day one. And they couldn’t have been more different. One was extravagant professor David Lankes, the other exuberant New York intellectual Lee Rainie. Both presentations were centred on current and future tasks of libraries.

David Lankes punctuated his talk “Librarianship: Saving the World One Community at a Time” with examples from various libraries. The gist of his presentation was the social responsibility of librarians. Whether it be political events, immigration, natural disasters or neighbourhood structures: he called for libraries to step out of their comfort zone, get their hands dirty and support the community. 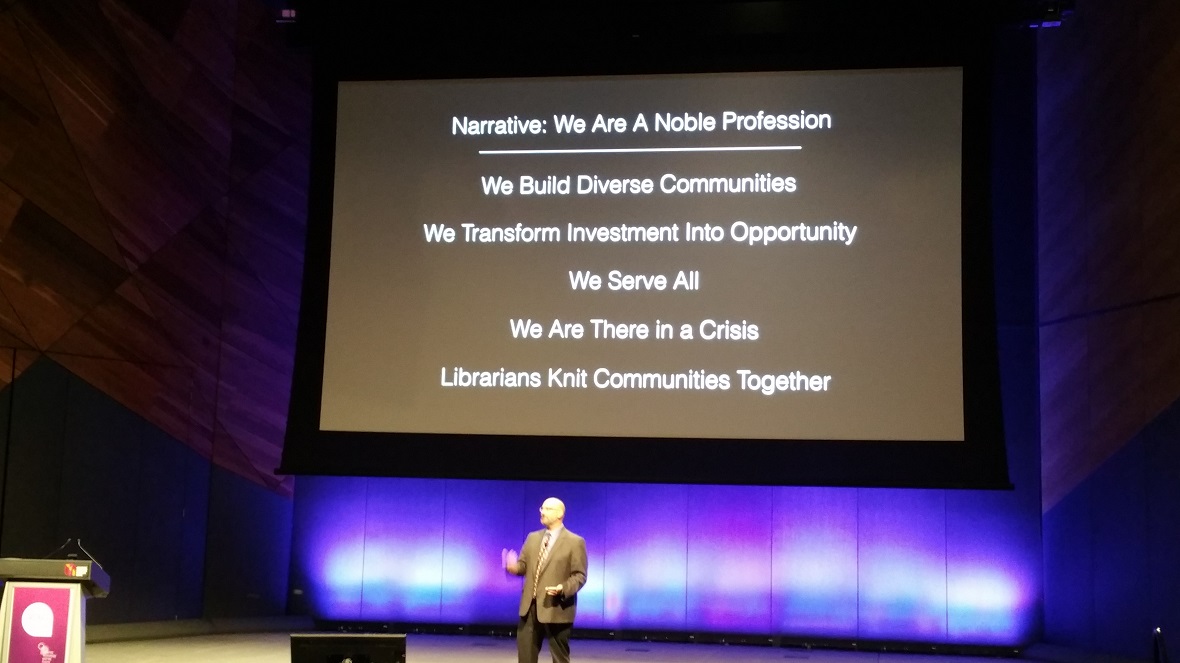 Lee Rainie, who works at Pew Institute, based his talk “The Puzzles Librarians Need to Solve” on the results of a repeat survey. He also asked whether libraries should remove a proportion of the books and shelves to make room for something else. The 2012 and 2015 responses were different and reveal a clear increase in the yes camp (70 per cent of those polled were in favour of the change in 2015). 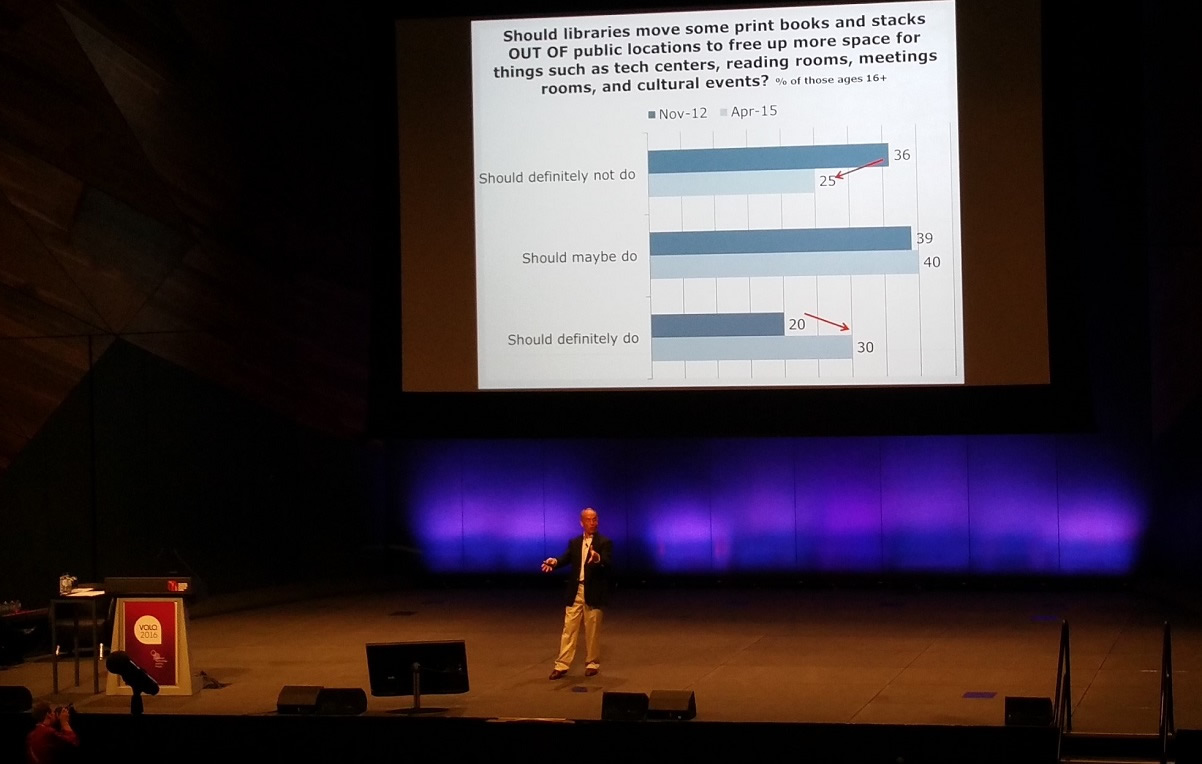 A recurring theme was the “Design Thinking” method, with two enthusiastic speakers reporting on its application. I also noted that a colleague had begun to use the agile project method. In her talk, Emma Lawler from Macquarie  University Library highlighted the new capabilities that librarians need to have under their belts to tackle the changing tasks alongside their regular duties: she particularly singled out project management skills, fun approaches to solving tasks, negotiation skills and multitasking.

In her talk “Beyond library walls: supporting academic capacity with digital Technologies”, Sharon Chua from Deakin University Library reported on the evaluation of four applications to support students and academics. The guiding theme was “digital literacy”. One area of this is the ability to use modern technology and achieve innovative learning concepts and educational scenarios. The project team tested the software tools evaluated with interested groups and produced examples of their potential applications:

So-called “librarians” work closely with the various faculties and help academics and students use the Tools.

Besides the wealth of talks, there was also plenty of time to chat to colleagues in the tea and lunch breaks. And this was actually very easy as there is a great deal of openness towards unknown colleagues here: no sooner had I plonked my lunchtime snack down on one of the many tables scattered around the exhibition hall than someone said hello. First up, the stock question: “Where do you come from?” They were all astonished that someone would travel so far to attend “their” conference. For my part, I was quite taken aback that nobody knew ETH Zurich. Very few people had made the journey from Europe. One representative from Europeana, Valentine Charles, was a keynote speaker on day two and talked about the development of linked open data for Europeana. In her presentation, she focused on the project and the mode of formation and development of linked open data technology, illustrating its application with a few examples.

The conference featured many good talks, which mainly described projects realised in practice. A broad range of topics was covered and many ideas were conveyed – from reorganisations via the introduction of Oculus Rift to the consideration of archival holdings (photographs). The last keynote speaker, Karin Lauritsen, particularly provided some vivid examples from her field – marketing for the library at Orfalea College of Business, Cal Poly, San Luis Obispo (California polytechnic). She opened up the library with her ideas and approach, and involved a vast range of groups in its goings-on. Posing her standard question “What if…” she touched upon various topics such as, “What if we play together?” Students were asked to turn the steps leading up to the library into a game board – just one example of how a library can be transformed into a lab and how library-goers were invited to take part through “learning by doing” or, as she puts it, “By being a futurist, rather than an expert”.

Finally, the conference closed with a breath-taking acrobatic dragon dance between the exhibition stands to mark the Chinese New Year. 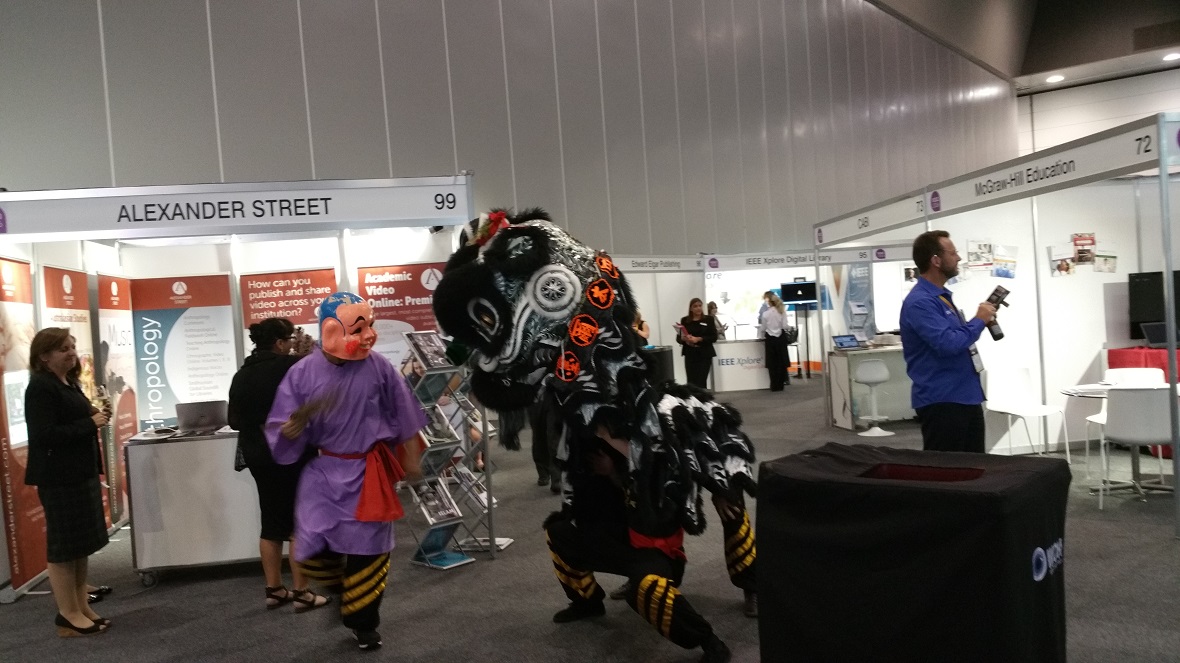 Figure 4: The conference closes with a dragon dance